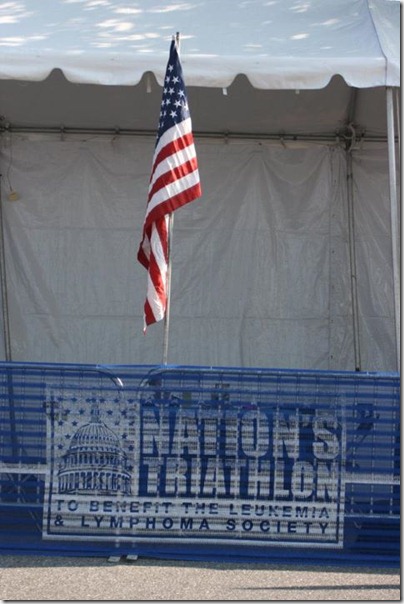 The 2011 season has been a different one for me in that I had one triathlon race in Sea Isle over Memorial Day and then no other triathlons or major races until close to the fall. I often compared it to having one of those classes in college where you basically studied all semester and then had one big test at the end that was pass or fail. There was a lot of pressure to be self-disciplined enough to make sure you were ready. Much like college, I really had to focus on getting the work in with balancing numerous social activities. Training through the summer has never been ideal as all vacations/events are always planned around quality workouts and making sure they happen. This summer would especially be hard with a couple of weddings (including mine) and associated commitments (bachelor parties).

The Nation’s Tri would be a good indicator of my fitness level and whether or not I’ve been training properly through the summer in preparation of the races I had lined up for the Fall:

One of the takeaways from my Ironman experience last November was to develop a plan and stick to it, both in training and during races. The Nation’s Tri started out as a warm-up for the Poconos Half Ironman. There wasn’t supposed to be much of a plan to the race other than seeing where my training was at and making the right adaptations before the Half Ironman. Everything changed when one of my triathlon buddies told me that Nation’s Tri was a regional qualifier for the age group National Championships in Burlington, VT. Basically, everyone who finished in the top third of their age group got a slot for the big show. I looked at the times that qualified the prior year and saw I was pretty close to being in the top third. I then made it my goal to tweak my training a bit to make Nation’s Tri an “A” race and make a run at qualifying.

Going into the race, I felt like I was in pretty good shape overall. In contrast to Ironman training, I have really balanced out the training between swim/bike/run. I think my run made the biggest gains basically because I ignored it the most last year which resulted in a pretty crappy marathon time at the Ironman. A good indicator of run fitness was doing the Livestrong 10K toward the end of August where I did a 44:43 (7:13 pace). Although I was feeling race ready, I did run into an obstacle with nagging feet/arch issues, specifically plantar fasciitis. Plantar Fasciitis is not something that goes away quickly and you basically have to manage the pain the best you can.

I’m not going to sugar coat it but the rainy weather in the DC area and subsequent cancellation of the swim and not replacing it with a 5K was definitely a swing in my favor since the swim is my weakest leg among the three. Having just a bike and run to plan for was a lot more predictable. The game plan going in was pretty simple. On the bike, the goal was to average between 200 to 220 watts for the first 20 miles and then take it up to 240 watts max up until the close. On the run, the goal was to stick around 7:20 min/mile pace for the first 4 miles then go as hard as I could to finish. Ideally, the splits would be:

With the Olympic distance, I did have to put some sort of nutrition plan in place, although it didn’t have to be as intense as the Ironman nutrition plan. I basically made sure to drink 20oz of water with one Nuun Tablet during the bike in addition to consuming one flask of EFS Liquid Shot to fuel the run. On the run itself, depending on how how it was, I had the option to take a cup of gatorade at Mile 1 depending on how I felt. 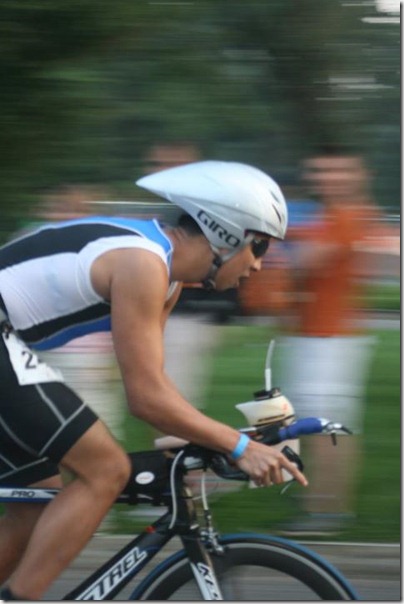 The bike course wasn’t very difficult with a few rolling hills and some short, steep climbs. The majority of it was an out and back on a long parkway.Due to the time trial start, there was a ton of drafting occurring among the riders but I didn’t fall into any of the chase packs because I was too paranoid about picking up a penalty. The guy with the fastest overall race time was docked a 6:00 penalty and fell all the way outside of the Top 20. I ended up averaging about 208 watts which was in range of what I wanted to do but I felt I could’ve pushed harder to be closer to 220 watts and get closer to averaging 24mph. The good news was that I kept my heart rate relatively low, averaging around 152 bpm (low Z2) and went into the run feeling pretty fresh. 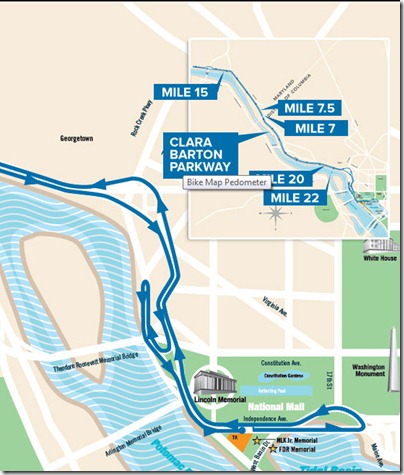 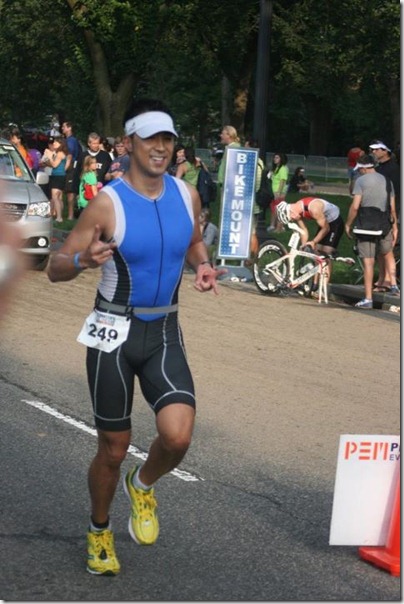 I started out the run “pacing by feel” to see what my speed was at a steady, comfortably hard pace. To my surprise, it was sub 7:00. As you can see from the photo above, everything felt pretty good at this point. I was able to hold to a good tempo pace up until around 26:00 in which was close to the 4-mile point. 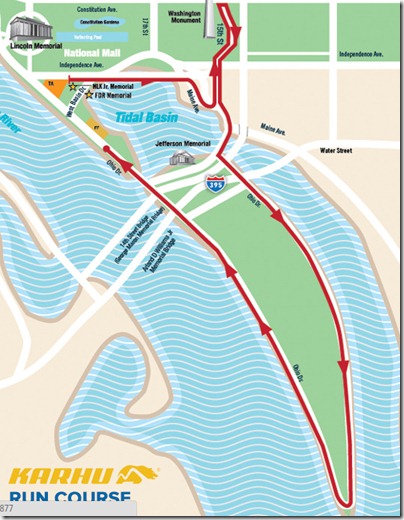 The run itself was a single loop on a fairly flat, fast course. The race organizers did a great job putting aid stations at every mile. At mile one, I ended up taking a gel packet and two gatorades due to an unexpected mishap on the bike (more on that later). As the run leg progressed, I caught a bunch of racers in my age group which helped my cause to finish in the top third. Toward the end, with about 300 meters or so, I made one last surge to sprint down as many people as I could. You can see that on the graph where my heart rate jumped toward the end from 186bpm to 199bpm within 90 seconds.

Looking back, there were a few mis-haps/things I should improve on for the future:

When I finished and received my unofficial results receipt, I had placed 48 which didn’t mean much unless I knew how many guys were in my age group. That number didn’t come until later in the afternoon, 407, which meant I made it into the top 12% and punched a ticket to Age Group Nationals! I really have to attribute the success of this race to simulating race conditions in the few weeks leading up to the race and putting together a realistic plan to stick to during the race. I can’t say enough how beneficial it was to know the different data points and formulating race targets around it. Post-race, the body felt fine except for the plantar fasciitis issues in BOTH feet. The right one is a lot worse than the left one. The trick now is managing the pain and getting enough quality runs in before the month ends when the Half Ironman hits on Oct 2 and a marathon hits two weeks later.

Posted by Unknown at 9:37 AM No comments:

Yurbuds: The Ideal Headphones for Working Out? 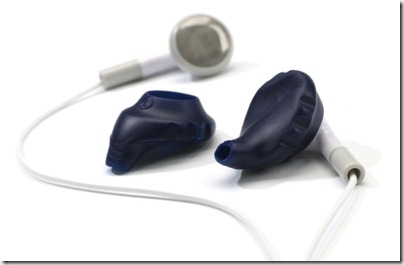 If I think about frequent, multiple purchases related to my working out hobby, headphones is easily the item at the top of the list. I’ve been through every type you can think of such as stock iPod headphones, stock Sansa headphones, Sony sport buds, Sony Over the Ear sport buds, JVC buds, Sennheiser Over the Ear, Sennheiser In Ear Buds, etc. None of them are in use anymore either because they crapped out due to sweat, not fitting right or I was immensely annoyed with how often they would pop out of my ears while working out. The last point is a biggie. Nothing takes you out of your element more than having to deal with headphones constantly popping out of your ear while you are working out.
After many years and many headphones, I think I’ve come across the perfect pair, Yurbuds.

While the cat was busy with another day of stretching out on the couch, I had to get in a bike workout before heading to Erie for the weekend. 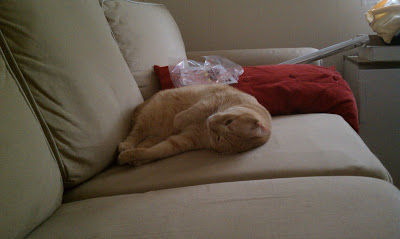 With the Nation’s Tri coming up in basically a week, I’ve been focusing on doing more speed/race pace specific workouts to get the body (and legs) primed for the race day. Its mostly been a lot of interval and tempo work of which some I’ve been able to get through and some being messy. For today’s bike workout, I decided to try an interval workout developed by Dr. Johnathan Little and Martin Gibala from McMaster’s University Dept of Kinesiology. In a nutshell, the actual workout lasts 27 minutes and is 12 intervals of 60 seconds at 95% of VO2 MAX and then 75 seconds of low intensity. The result of this low volume, high-intensity traning (HIT) are performance gains similar to high volume endurance training at a steady state if done 3 times a week. If you are a physiology geek (and I say that in a good way), you can check out the full abstract that was printed in The Journal of Physiology on January 25, 2010 <<link. Conventional wisdom for endurance training is volume, lots of volume, and more of it when you’ve had enough but with the kind of schedule I have and time constraints, if there’s a way to train smarter and optimize training time, I’m all for it. In fact, I’m currently on a marathon training program that only has me running only three days a week.

I set-up shop in the Torture Chamber with the usual set-up: 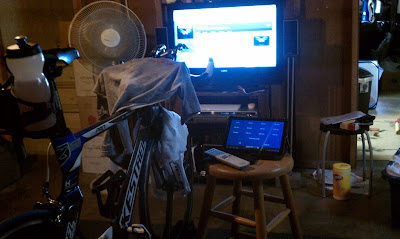 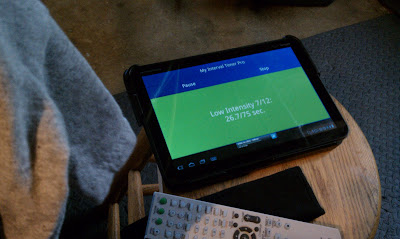 The tricky part before the workout was figuring out what exactly 95% of my VO2MAX really meant. I’ve never done a VO2MAX test formally but have done other tests like Heart Rate Lactate Threshold and an FTP test on the bike. Luckily, I found an FTP wattage chart which translated different FTP watt ranges to intensity levels. I knew I had an FTP of 260 watts from a test I did back in April so that translated to having to hit between 275 – 322 watts to be around VO2MAX. It wasn’t exact but at least I knew the numbers I had to hit on my bike.

The workout itself wasn’t that bad. I felt like it stretched me but not to the point where I felt like I could not finish the workout after any of the intervals. After the first 8, I decided to challenge myself a bit more and bumped my range for the last 4 intervals to be between 320 – 340 watts. The resulting power ranges/heart rate stats can be seen below: 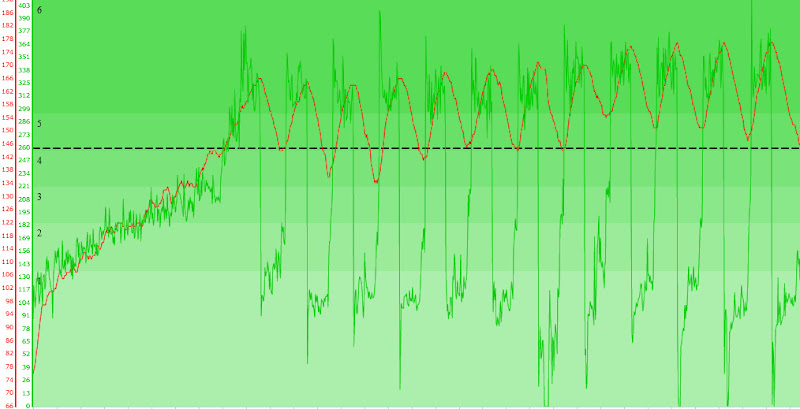 The red line correlates to my heart rate with the green line representing my power (in watts). The black line is my Threshold Power (FTP) @ 260watts. Its cool to see the how the different power levels affect my heart rate and the rise/drops during the high intensity/low intensity portions. Data like this is useful to me to see how consistent I was with my intervals and whether or not I pushed it hard enough or too hard during the intervals. You can see how the last four intervals are higher than the first eight in both Power and corresponding Heart Rate.

I’m going to try to incorporate the Little Interval more into my workouts and see if it does improve my cycling fitness as I gear up for Ironman Poconos on October 2nd. That being said, time to finish packing up and head out to Erie for a weekend of spending time with family and friends and of course, more swim/bike/run training. Have a great Labor Day Weekend!

Posted by Unknown at 8:18 PM No comments: