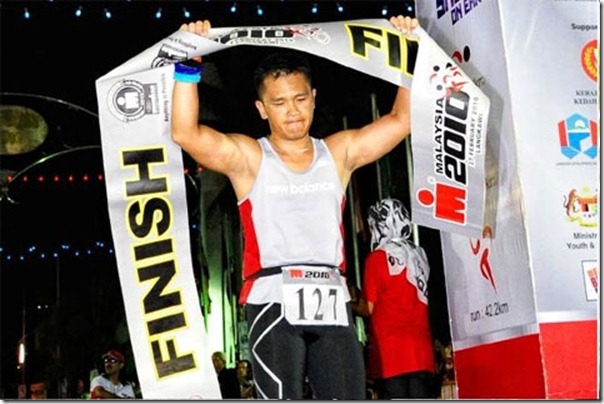 I can’t read your minds, but I know many of you are thinking about it. You are thinking about that one “big race” you want to do in 2011. It might be your first 5K or 10K. It could be a half marathon or even a full marathon. You might have been following my preparations in completing an Ironman through the past year and might have the triathlon bug. Maybe you had a moment of invincibility while partying New Year’s Eve and made a pledge to finally do it this year like how Dave Fleming, an ESPN reporter, details his first marathon experience. Somewhere in the back of your head, there’s a little bit of doubt that has kept you from committing to that big race. I’m going to give you the reasons why it is your turn in 2011. As my buddy Pete likes to say, “Get into it!”

Here’s a collection of objections I’ve heard over the past year and my thoughts on overcoming it.
I can’t handle a triathlon, its too long
When most people hear about a triathlon, they think about the Ironman championships in Kona, Hawaii. They see on TV the high heat/humidity, the day long race and it becomes this impossible event in their minds. There are shorter distances with the most common being a Sprint distance. The Sprint distance usually comprises of quarter mile to half mile swim, around a 13 mile bike, and then a 5K run. Doesn’t sound too bad now does it?
I can’t swim
Up until January of 2008, I couldn’t swim either. You can take lessons at the local Y, use online resources (just Google it) or try DVDs. One of my favorites are the Total Immersion Freestyle DVDs. Tim Ferriss highlights his experience learning to swim effortlessly in 10 days with Total Immersion on his blog.
I can’t run, my knees can’t take it
This is probably the number one reason I hear from folks who don’t like to run or don’t do it often. It always comes down to two factors: bad running form & not enough leg strength. I used to get horrible knee pains until I consciously changed my running form. This included focusing on exercises to strengthen my quads which stabilizes the knee and moving to a shorter, quicker stride where the mid-foot hits the ground. Trifuel posted a great article on key components to improving running form and the following example made a lot of sense:


Research is finally being done on running biomechanics, and is showing that a heel strike causes much more force on the joints than a more natural mid-foot strike. It’s pretty simple to determine which strike is more efficient. Stand up and extend one leg and slam your heel onto the ground. Now, do the same only with a slightly bent knee and strike at the mid-foot (the last lace on your shoe). Which one were you able to generate more force? You probably had to hold back with the heel strike otherwise you might damage your knee joint. Now picture yourself running three, five, ten or twenty miles heel striking. This should give you a better understand of why so many runners develop overuse or acute injuries.

A couple of good resources on moving to a more efficient, mid-foot stride are Chi Running and Pose Method.
I’m too old to do those types of races
Try telling that to my mom who at the age of 52 ran her first 5K. Better yet, tell that to Lew Hollander who, at the age of 80, finished his 21st Ironman World Championship out of 21 tries. It isn’t like he’s been close to the cut-off either. His time this year was 15 hours 48 minutes, or 1:12 under the 17-hour cut-off. Age is just a mental excuse.
I don’t own bike/bikes are too expensive
Not everyone has to start out on a shiny, new bike. I have advocated that the best value for road bikes are getting them used. Most of the time, the people selling their bikes have had them for 1 or 2 years and are looking to upgrade to the latest and greatest. Any of your cycling friends can lend advice on how a bike should fit so you get a general idea of your size. My fiancée recently purchased a used 2008 Cervelo P2 off of Craigslist for $600. A brand new one would run you close to $2,800. If you don’t want to buy used, the next best thing is getting a prior year model when the new models start to trickle out. There are great bargains out there if you look for them.
I don’t have the time
This is the one excuse that gets me fired up. The best investment you can make for your body is to keep it healthy. All you really need is 30-minutes a few days a week. In 2010, the average American watched 34 hours of television a week! That’s incredibly horrible! I’m sure many people can cut out a few shows they watch or even learn to use Tivo to skip over commercials. The most irony comes from folks who lose exercise time and instead are watching shows like The Biggest Loser. My opinion is that if you make the priority, you will always make the time.
Those are a few of the common ones. Leave me a comment if you have any others that I can add to the list.
Posted by Unknown at 9:20 AM