I’ve been using the Zeo Sleep Monitor for close to a year now and have not been doing as much analysis as I would like with this kind of data other than seeing how my nightly sleep scores compare to the average for my age group demographic (for those interested the 30 – 40 age group average is 80). For a little more detail on this, you can check out an earlier post in which I compared my average sleep to the national average. While sifting through the daily reports, I remembered asking myself what exactly does different types of sleep look like. What does an ideal night of sleep look like? Is drunk sleep really sleep? How well do you sleep after a workout that really zaps you? Well, due to some diligent tracking, I’m able to shed a little bit of light to those questions through some very un-scientific data gathering leveraging the Zeo Sleep Monitor. 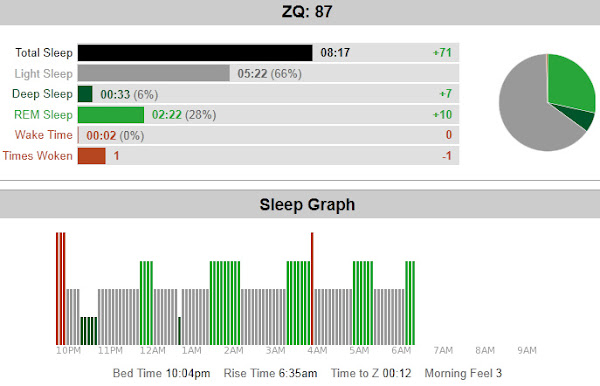 The chart above depicts an ideal night of sleeping as captured by the Zeo Sleep Manager. The sleep score of 87 is well above the national average of 80. I was able to sleep just over 8 hours which is in the recommended 7 to 8 hours of sleep per night everyone hears about as a rule of thumb. I was also only up once, presumably to hit the bathroom so for the most part, I slept un-interrupted through the majority of the night. Graphically, you can see that I had a pretty consistent sleep cycle of light sleep/REM sleep. The only item that could use some improvement is increasing the amount of time in Deep Sleep but that’s a deeper topic. 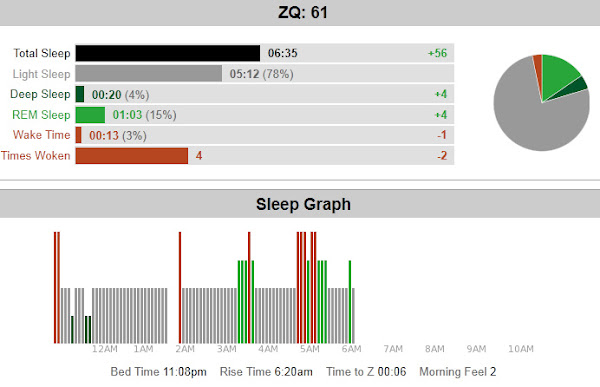 The chart above is from the night of Sunday, August 14th. That morning I did a 12.5 mile mixed pace run on a treadmill whereby the first 30 minutes was done at a Z2 pace, 60 minutes at Z2 with every 5th minute at Z4, then wrapping up with a 15 minute marathon pace tempo. Later in the day, around 5pm, I did another 5 mile run at Z2 pace. I was pretty spent by the end of the 5 mile run and it really showed with sleep. Theoretically, I slept just over 7 hours which is a decent night but was really asleep for only 6:35 according to the Zeo Sleep Manager. Right off the bat, you can see that I was never really able to get into a decent sleeping pattern which I’d attribute to soreness/lots of tossing and turning as evidenced by 78% Light Sleep and completely waking up 4 times. I barely had any Deep Sleep and REM sleep was cut by more than half over an ideal night of sleep. I’m not sure how to address the tossing and turning from feeling sore but the easy takeaway here is if you have a hard workout the day before, you really need to account for extra sleep to fully recover. 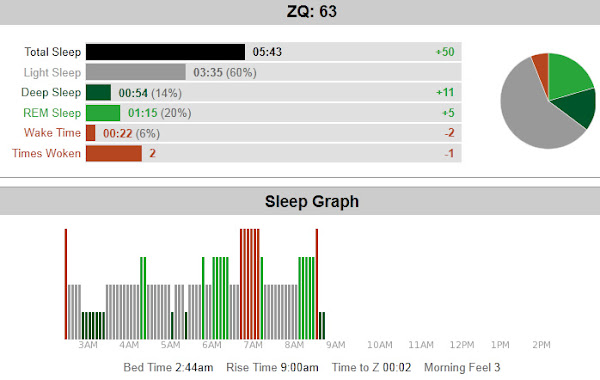 The last example is an interesting one. I somehow managed to slip on the Zeo headband before I passed out after a hard night of drinking. I don’t remember exactly what I drank or how how much but give me a break, I was drunk. Although I passed out/fell asleep at 2:44am, I managed to sleep until exactly 9am, which was probably an alarm I had set. The interesting piece is that although I slept less overall (5:43) compared to the night where I was fatigued from running (6:35), The ZQ score was higher on the drunk sleep night (63 vs 61). The primary reason being that 34% of the time being asleep was quality sleep (Deep + REM) versus just 19% on the fatigued night. Graphically, the Zeo Sleep Manager reporting did show some resemblance of a sleeping cycle on the Drunk Sleep. The main difference is that large block of Deep Sleep that occurred shortly after passing out. I’m not sure if that’s because of the alcohol but it maybe an explanation. I’d have to note that for this particular night, I didn’t wake up the next morning feeling terribly hungover. Maybe a bit sluggish, but definitely not sick. I think this may have factored into the quality of sleep. It is tough to say that drunk sleep is better than fatigued sleep through one example but it is an interesting comparison.