Earn It to Own It and Other Race Apparel Etiquette 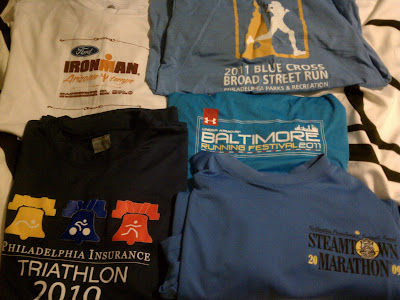 I've been on the fence about whether or not I'll go ahead and gut out running the Philadelphia Marathon this weekend due to my ongoing struggle with Plantar Fasciitis. It's frustrating knowing that I have the aerobic capacity and strength to run a marathon but am limited by an injury. In conversation with friends about dropping out and eating the $125 registration fee, someone mentioned that at least I would get a nice long sleeve tech tee out of it. Therein lies an interesting point. I don't think I would pick up and wear a shirt for a race I didn't do. Coincidentally, I saw this list of informal race shirt etiquette rules posted on the forums on slowtwitch.com. Personally, I’ve never worn a shirt or apparel for a race that I did not run or complete and I don't think I'd make an exception for the upcoming Philly Marathon. In a way, I feel like it would be disrespectful to the actual participants that were in the race. Earn it to own it.


1. A shirt cannot be worn unless the wearer has participated in the event. There is an exception, though: "significant others" and volunteers are exempt.

2. Any race tee, less than a marathon distance, shouldn’t be worn to an ultra marathon event. This goes double for the wearing of sprint-tri shirts to Ironman and Half-Ironman events. It simply doesn’t represent a high enough "cool factor " and sends a red flag regarding your rookiness. It's like taking a knife to a gunfight. It's probably best just to wear a generic name-brand athletic shirt, and go hide in a corner until race time.

3. When you are returning to a race in which you have previously finished, then wear the shirt from the first year you completed the race. Don’t short-change yourself by wearing the shirt from the year before. It doesn’t adequately display the feat of accomplishment or the consummate veteran status that you are due.

4. Never wear a race event shirt for the (same) race you are about to do. Only rookies do this. It displays a total lack of integrity and might put the bad-heebee-jeebee-mojo on you for the race. Wearing a T-shirt of the race, while currently running said race, is discouraged. It’s like being at work and constantly announcing "I’m at work". Besides, you wont have the correct post-race shirt then...unless you like to wear sweaty, pitted-out clothes on a regular basis. If you do, then go back to the swamp, Gomer.

5. Never wear a shirt from a run that you did not finish. To wear a race shirt is to say "I finished it". Exceptions: see guideline #1.

6. A DNF’er may wear a race shirt if... the letters DNF are boldly written on the shirt in question (using a fat Sharpie or a Marks-A-Lot).

7. During a race, the wearing of shirt from a previously completed year is acceptable. Wear the oldest T-shirt you have from that race (see guideline #3). This is probably a good practice because you now have no excuse to drop out since you’ve done it before.

8. If possible, runners should buy significant others T-shirts which can be worn without regard to running the race. (see guide #1). Keep in mind, they support your "running Jones" more than you think. They also have ways of punishing you that you can't even imagine. Or maybe you can.

9. Volunteers have full T-shirt rights and all privileges pertaining thereto. So there. Remember, you can always volunteer for a race and get a shirt. I encourage this as your civil duty to be a member of the running community. Races don't happen without volunteers, folks.

10. No souvenir shirts: therefore, friends or anyone else not associated with the race may not wear a race shirt. If your mom thinks that your Boston shirt is lovely, tell her to QUALIFY for Boston herself, & send in her application early for next year, so she can earn her own shirt. A downside to this: she still has plenty of time to write you out of her will between her training runs for the big race. Note that your mom CAN wear your finisher's shirt under one of these 4 conditions- 1) you still live with your mother; 2) she funded your trip to the race; 3) she recently bailed you out of the slammer; or 4) All of the above. There is an exception to this guideline: (refer to # 1...If you are a "non-traditional family," and your mom actually is your Significant Other).

11. Always wear the race shirt of your last race at the current race’s pre-race briefing. The more recent the race, the better. This is a good conversation starter. However, avoid the tendency to explain how that it was a training run for this, and this is just a training run for the next, etc. It just sounds like your rationalizing mediocre performances. Sometimes it’s best to live in the here and now.

12. Your t-shirt should be kept clean, but dried blood stains are okay, especially if it is a trail race or a particularly tough event. If you're an ultrarunner, you can even leave in mud and grass stains, (and porcupine quills). Not washing-out the skunk scent is pushing the macho thing a bit too far, though.

13. Never wear a T-shirt that vastly out-classes the event you're running. It’s like taking a gun to a knife fight. Or like unleashing an atomic bomb among aboriginal natives. You get the idea.

14. Also: never wear a blatantly prestigious T-shirt downtown or at the mall among non-running ilk. People will just think you have a big head, which you do. You'll also get stupid questions, like, "how long was that marathon?" If it's a shirt to a 50 or 100-miler, they'll think it's a shirt for a cycling event or just think you're totally nuts, which (of course), you probably are.

15. Never, ever, borrow a race finisher's shirt from another runner to wear to an event that you didn't run. If you do, remember that in Dante's Inferno, he wrote about a special Hell for characters such as you; right between Tax Collectors and Lawyers.

16. All children or grandchildren of ours can wear hand-me-down race finisher's shirts for races that I've run in. When they are asked, "did you run in that 100-mile trail race?" They can proudly respond, "no, but my daddy (or grandad) did." If your progeny has put-up with you being an ultrarunner, they have said rights too. If you have completed an Ironman, your kids also have the same rights. They've put up with a lot of crap (or outright neglect) over the years, and deserve to wear them.