The Most Incredible Home Cooked Steaks Courtesy of Sous-Vide 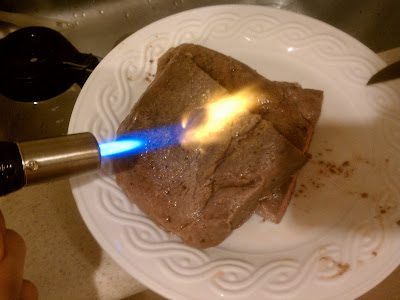 "Whoa...is that a blow torch cooking the steak?" Yes, that's a blow torch but it is only for "finishing" the steak. To further your confusion, the steak was cooked in a crock pot of water for about six hours and the finished product is hands down the best home-cooked steak I've ever had. All of this is courtesy to the Sous-Vide method which cooks the meat evenly throughout, not overcook the outside, and retain more of the food juices. This kind of cooking used to be limited to high end gourmet restaurants but now there are ways for us non-professionals to enjoy foods cooked Sous-Vide.

So what exactly is Sous-Vide? In a nutshell, it is cooking food that has been sealed in an air tight plastic bag in a water bath for an extended period of time at a very precise temperature. The temperature of the water is pre-set and the food item can never be cooked over that temperature. Since the food is sealed, almost all of the juices are retained.

As an example, when you order steaks, the "doneness" is actually associated with a specific temperature of the inside of the meat. Contrary to what most people think, it has nothing to do with the color. Here's a table:

Traditionally, the cut of meat is placed on a grill at a much higher temperature then the desired internal temperature. If the meat is cooked too long, it burns. If it isn't cooked long enough, it is under cooked. The beauty of Sous-Vide is that you get the water to your desired temperature and the meat will cook to that exact temperature. It will probably make more sense walking through the process I used so here's an overview from the Ngo kitchen. 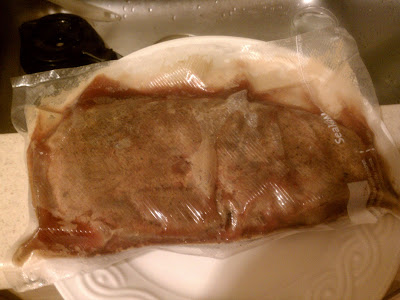 First off, I'm using a piece of regular sirloin steak that I purchased at BJ's for $4.99 a pound. I rubbed the steak down with sea salt and pepper and then sealed the bag via a food bag vacuum machine and Seal-a-Meal plastic wrap. 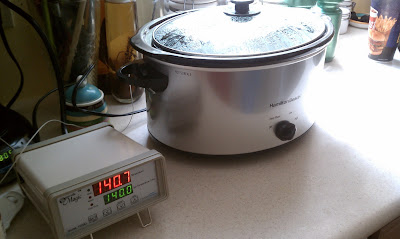 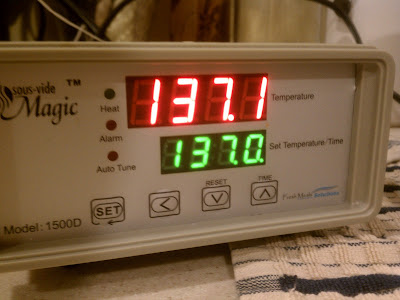 Next, I connect a regular house hold crock pot to a device called the Sous-Vide Magic. I set the desired temperature that I want the water to stay at and it automatically controls the crock pot cooking temperature to get the water to within .1 of a degree of what it should be using a thermometer that goes inside the crockpot. In this case, I like my steaks medium-rare and Carly likes it cooked medium so I compromised on 137 degrees. 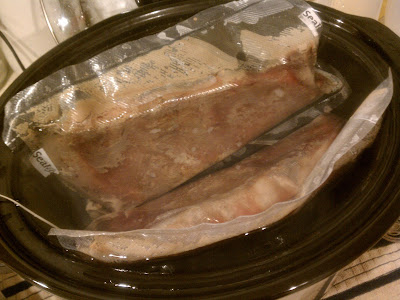 The steaks then go into the water bath, the lid goes over the crock pot, and the steaks stay there for about six hours to ensure its cooked fully to the right temperature. 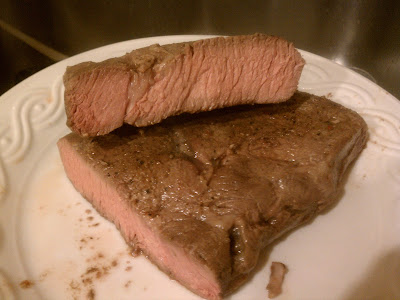 After six hours, the steaks get taken out. As you can see, very even color and full of juice! But what about that nice, fresh off the grill flavor? Well . . .

That is where the blow torch comes into play to sear the meat!

The end result is a piece of affordable steak that absolutely melts in your mouth. I feel that I'm just scratching the surface with potential recipes. Different mixes of spices is something I'll try in the future as well as wrapping the meat in bacon!

Finally, to address a question that you probably have: "Is it safe to cook meat wrapped in plastic?" With the awareness around the dangers of BPA, this is a perfectly natural question to think of. In addition to BPA, PVC is another plastic material consumers should avoid because it breaks down in heat as well. The food bags I'm using from Seal-a-Meal are poly/nylon blend which is BPA/PVC free and safe for cooking in high temperatures.

Interested in trying out Sous-Vide? Here's a few methods/devices I've come across. I'll rank them in order from Kitchen Worthy to Ghetto: 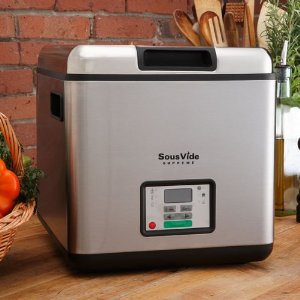 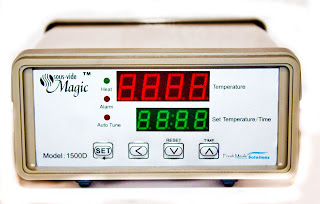 Sous-Vide Magic Controller by Fresh Meals Solutions ($160): Hooks into a crock pot to control temperature. This is what I use. 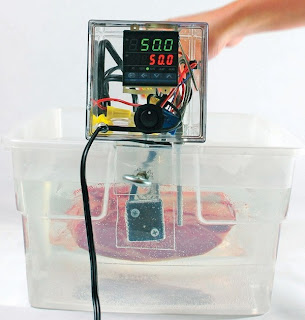 DIY #1 Sous-Vide Cooker with PID Temperature Controller (about $75 in parts + time/skill): For those who like projects and/or was in FIRST Robotoics club in high school. 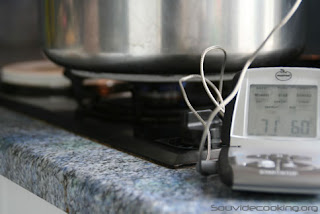 DIY #2 Sous-Vide on a Stove with Big Pot of Water and Digital Cooking Thermometer (~$30 + patience): I actually tried this as my first go around with Sous Vide cooking. It was a PITA trying to get the water temp  to stay consistent. 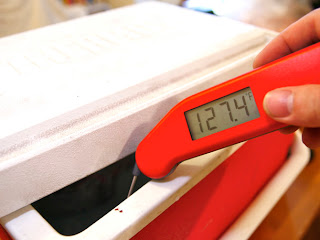 DIY #3 Sous-Vide via a Beer Cooler and Hot Water (~$20 + patience): I haven't personally tried this, but in theory it should work. Serious Eats posted an article on this with pretty favorable results.

All this talk about Sous-Vide is giving me the itch to to try some new recipes. There's tons of ways to try Sous-Vide so give it a shot and let me know how it goes. In the meantime, I'm going to try to recreate this guy: 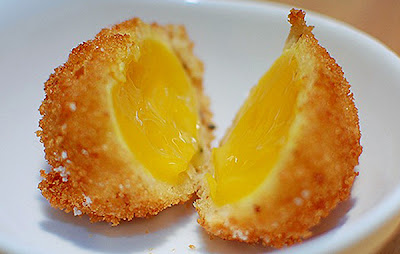