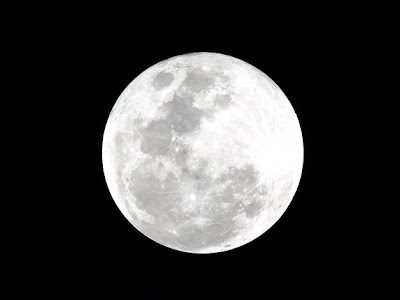 Figuring out ideal training conditions is always a trade-off depending on what season of the year you are in. During the Fall season, the weather is more conducive to running outside from a temperature perspective but the major disadvantage is the lack of day light to train in. At this point, you are pretty much forced to run in the dark before work or after work if you prefer to run outside.


As Winter starts to settle in, I'll start to transition a couple of runs onto the treadmill but I'm going to make sure at least 50% of my mileage comes from running outside so my legs don't get overly acclimated to the softer treadmill surface. Looking back on the 2011 season, I think the shin splints/plantar fasciitis could have been minimized/avoided had I not exclusively done all of my running on a treadmill during the winter and making a gradual transition to running on concrete/asphalt again when Spring started to come around. I'll still get mileage in daylight on the weekends but that can't be the source of all my outside running so I'll have to make time either early in the morning or after work which means having to run in the dark.

With that in mind, the last thing I need is getting hit by a car while running in the dark so as a safety precaution, I do wear a number of reflective items to maximize the ability for others to see me out in the dark. 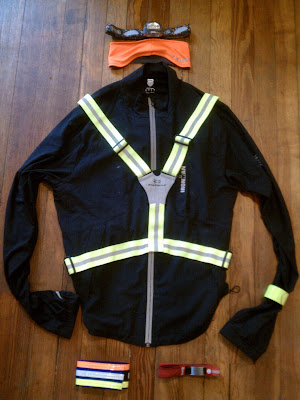 From Top to Bottom, here's my current running in the dark set-up:
Below is a picture of how the set up looks in reflecting light. As you can see, pretty damn luminescent. Flashing. Flashing. Lights. Lights. 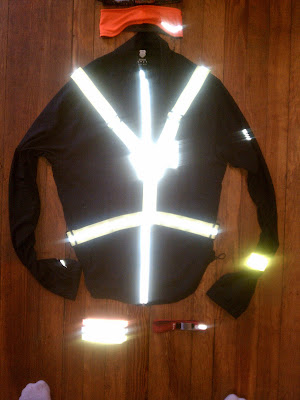 If I could only wear one item from the list above (exclusive of the RoadID bracelet), the Amphipod Xinglet easily gives the most bang for the buck. It fits completely around your chest/waist to give 360 degree visibility and is very minimal. I also like the way it looks over some of the more traditional running vests. Yes, I'm a shallow runner. 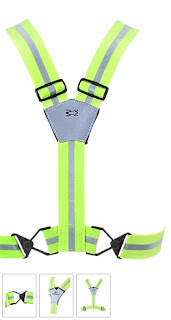 One final point. I know the headlamp seems very nerdy so I'll explain that one. For the most part, many of my runs are some type of interval repeats which I'll do with loops around my neighborhood if I can't make it out to the track: 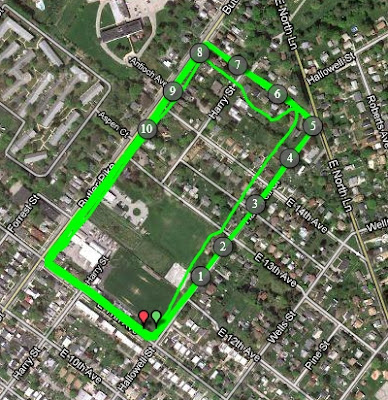 My local Conshohocken interval "loop" just outside my house. Just under 1 mile.

There are times thought when I just want to do an easy mid to long distance run and not be bored by doing the same loop over and over again. During these runs, I opt to do it on the Schuylkill Trail which has absolutely no lighting. The head lamp provides just enough light to see where the trail is going, avoid tripping over anything and avoid potentially stepping in dog/deer/bear poo. Outside of running, the head lamp has also been super handy in situations where I need to use a flashlight but need both hands so there are definitely other practical benefits of owning a head lamp. Spelunking anyone?

Any other cool night time reflective pieces you use and really like? Let me know!