In The Kitchen - Burgers and Chicken Fingers 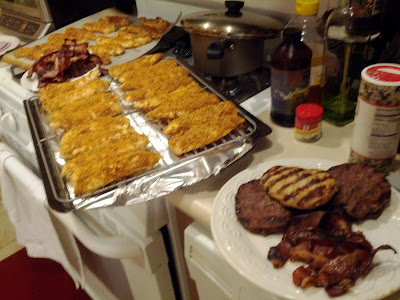 I've been doing a good bit of cooking the past couple of days as I'm trying to be better about making food for the week to have around and not eat out as much when I'm too lazy to cook. I also need to start chipping away at the 43-POUNDS of organic grass-fed beef I purchased through the Philly Cow Share program. There is a bit of irony about the getting the grass-fed cow because most of the people that I purchased the cow did it for Paleo Diet purposes but about 11 pounds of cow portion were 44-quarter pound hamburger patties that most people would have to eat with a wheat-based burger bun. That's a No-No on the Paleo Diet. I love me a good burger though so I did not let that deter me and when out and tried some burger bun recipes that are wheat free. I was "on a roll" with cooking so I also decided to make a batch of almond-crusted chicken fingers. Generally hamburgers and chicken fingers wreck your diet but I'll walk you through how to make it a lot more healthier and still somewhat satisfy your junk food cravings.

For the buns, I decided to try out two recipes rather than simply buy gluten free bread. Did you know most gluten free breads have a glycemic index worse than plain old white bread? Gluten-Free doesn't necessarily mean its is good for you. The two recipes I tried was a Flaxseed based bread and the other was a more traditional "bun" consisting of almond and coconut flour. First up was the flaxseed flatbread. The recipe itself was easy enough. The one twist was using parchment paper to line the pan but it prepared/baked pretty easily.  I then cut the finished product into six equal pieces which I would slice in half to use as a bun. 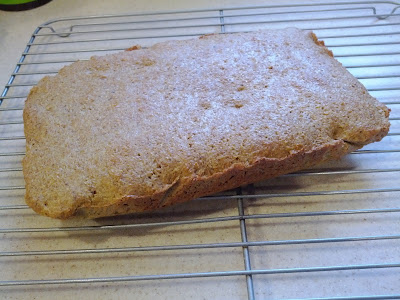 The other recipe I tried was a coconut/almond flour mix. This one looks more like a traditional burger bun. Like the flaxseed bread, I had to use parchment paper to line the baking sheet. 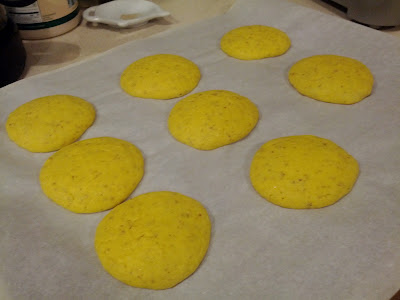 I then grilled the burgers and came out with the finished products. Yes, ate a pound of hamburger beef on my own, don't judge me. 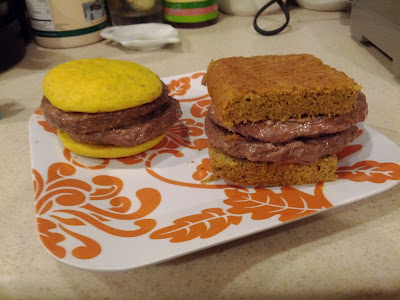 Taste-wise, it is definitely different textures. The almond/coconut flour bun tasted fairly close to a regular bun and even handled like a regular bun. The flaxseed flatbread was a bit thicker than a regular hamburger bun but tasted fine to me. Unless they come straight out of the oven, both tasted a lot better spending some time in the toaster before combining with the burger.

With trying to save time by "batching", I also decided to make chicken fingers. Most people think of chicken fingers and envision a hunk of chicken that's been deep fried. A little healthier would be baking chicken tenders with the breading but if you are trying to avoid wheat like me, that's not an alternative either. I came across a recipe that uses almonds as the basis of the breading along with some other spices. The chicken fingers are fairly easy to make as the prep is almost identical to what you would do for regular baked chicken tenders. 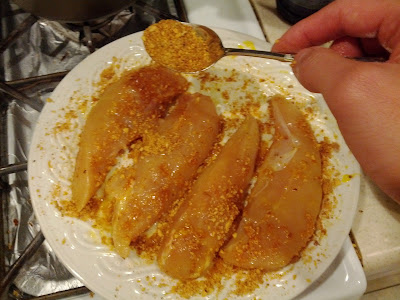 Spooning the almond breading over the chicken tenders 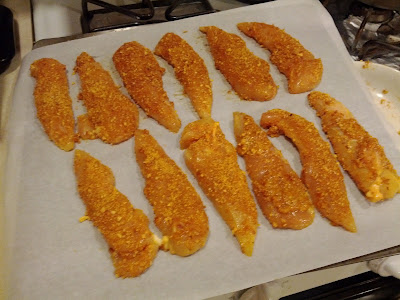 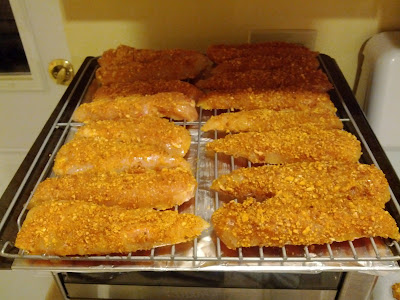 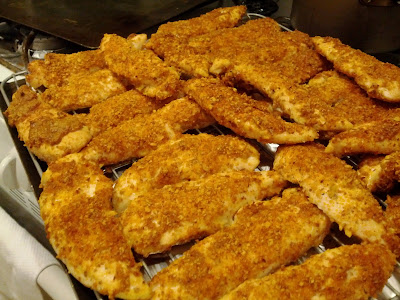 I love making the chicken tenders because they are very versatile for meals the rest of the week. I can combine them with the homemade buns to make a chicken club sandwich, I can cut them up and use them for my lunch time salads instead of buying the prepackaged stuff with preservatives in it, or I can re-heat them quickly in the toaster oven and eat them stand alone.

To round out the night of cooking, I fried up a batch of nitrite/nitrate free bacon which will go great with the burgers, breakfast, chicken club, etc...you get the idea. 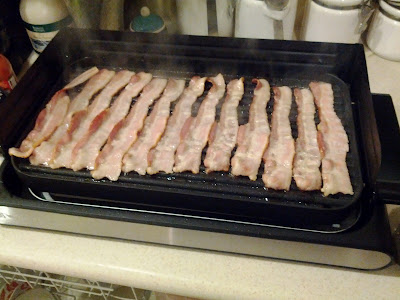 Preparation
1. Preheat oven to 475°F. Line a baking sheet with foil. Set a wire rack on the baking sheet and coat it with cooking spray.
2. Place almonds, flour, paprika, garlic powder, dry mustard, salt and pepper in a food processor; process until the almonds are finely chopped and the paprika is mixed throughout, about 1 minute. With the motor running, drizzle in oil; process until combined. Transfer the mixture to a shallow dish.
3. Whisk egg whites in a second shallow dish. Add chicken tenders and turn to coat. Transfer each tender to the almond mixture; turn to coat evenly. (Discard any remaining egg white and almond mixture.) Place the tenders on the prepared rack and coat with cooking spray; turn and spray the other side.
4. Bake the chicken fingers until golden brown, crispy and no longer pink in the center, 20 to 25 minutes.

Instructions
1. Preheat oven to 350° F.
2. In a large bowl, mix coconut flour, almond flour, baking powder and sea salt together with a fork.
3. In a separate bowl, blend eggs and coconut oil.
4. Pour egg mixture into flour mixture and combine completely.
5. Line a baking sheet with parchment paper, and grease the paper lightly with coconut oil.
6. Pour the batter onto the oiled parchment paper to make eight (3-inch diameter) pools.
7. Bake for 10 minutes.

Flaxseed BreadFirst get two bowls. One for dry, one for wet


DRY:
2 cups - Bob's Red Mill GOLDEN Flaxseed meal.
(You must use the Golden version unless the bread tastes weird)
3/4 teaspoon baking soda
1/4 teaspoon or a couple of pinches of salt
1 teaspoon apple cider vinegar (I know this is wet, but just pour it on top of the baking soda to get a fizzy reaction. You can use 3/4 t Cream of Tartar if you want but I dunno if that's primal)

WET:
5 LARGE eggs.
(Important: They should be room temperature so you put the eggs into a bowl of warm water beforehand if they are not). Don't use Xtra large, jumbo or medium eggs. Just large.
3 tablespoons filtered water
3 tablespoons of olive oil
1 tablespoon of agave [or 1.5 tbl of melted down palm sugar]

EQUIPMENT:
8" x 11" glass pyrex pan. Don't use a 8x8 square pan or you will get bread that is too thick.
Parchment paper (yes, use this. NOT wax paper or it will stick)
Bread rack - important to get nice texture after drying.

First like I said above, make sure the eggs are room temperature by soaking in a bowl of warm water. Combine all the wet in a bowl. Beat it until its frothy. The pour the wet into the dry. Stir it up and put aside. Wait at least fifteen minutes.

The "dough" should be thick enough so when you lift it up with a spoon it holds together. It's not as gummy as real bread dough though, so you should use a spatula to get it out.

Preparing the bread pan: Cut the parchment paper, eyeballing it so there is about a 1" "lip" of paper around the pan after you push the parchment into the pan. That's so when the bread rises on the sides its still touching the parchment and not the glass.

Now use a spatula to dump the "dough" into the pan onto the parchment paper, carefully making sure the lip of paper is even around the pan. Wet your fingers and spread the dough evenly around the pan.

Bake at 350 degrees for about 25 minutes. It should be dark around the edges and light brown beginning to turn dark brown on top. Slide it out and dump the whole thing on top of a bread rack, taking off the parchment paper.

Let it cool for an hour or more or so its dry on top when you cut into it.

Then cut six slices out and put them in plastic bags. They store for several days, or about a week in the 'frig. But for best results eat within 48 hours. They will get moldy after 3 or 4 days so I put half in the 'frig, and leave half out.

Email ThisBlogThis!Share to TwitterShare to FacebookShare to Pinterest
Labels: Nutrition