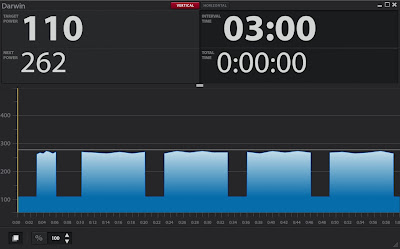 Competing in races involves just as much mental capacity as well as physical capacity, even more so for endurance races where you actually have time to "think" during a race and not simply just react. Occasionally I'll have the mental battles either during training or a race so I thought it would be different to share some of my mental approach to training and racing to give you an idea of what goes off inside of my head. Today's story is called, The Difference.

The Difference. I'm not talking about that great song by the Wallflowers when I was a sophomore in high school.

I'm still on the bike trainer for my week day cycling workouts and using TrainerRoad as my primary training schedule for bike workouts. Today's workout was called "Darwin" and the main set was 4 x 10 minute intervals at FTP with 3 minutes rest between intervals. FTP (Functional Threshold Power) is basically the maximum average power a cyclist can maintain over a one-hour effort. The workout didn't seem too bad but I know anything with intervals over five minutes gets challenging for me because I start to lose focus, especially on a trainer.

I got through the first two intervals fine and hit the targets: 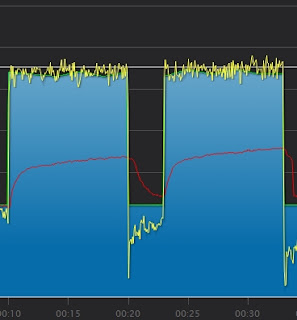 At the end of the second interval, I started to feel dehydrated. When I wake up in the morning, I usually drink 28 - 32oz of water to replace whatever was lost while sleeping but I realized I only took in about 20 oz of water. It doesn't seem much of a difference but somehow it affected me today, probably due to the amount of sweat I was losing because of the intervals. I stopped and when drank another 10-12oz of water and refilled the water bottle with the EFS sports drink I'll usually use for longer training rides with the intention of accelerating re-hydration.

I then re-started and tackled Interval #3 which didn't go so well: 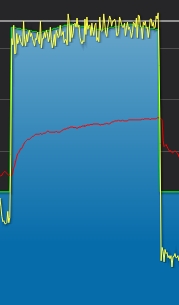 
Not horribly under target but it was a drop-off of 7 watts from the last interval. The body didn't feel real great but I went ahead and started the last interval, #4, and thinking to myself, "This is the last one, let's finish this out..."

Interval #4 didn't start out so well either:

For the first 1-2 minutes, I was terribly under target, probably struggling to break 240 watts which was a pretty significant drop-off. At this point, I really thought about calling it a day and quitting but then, pretty randomly, the following question popped into my head:

Mentally, I knew the answer was simple.

At this point, my power started to climb back up again I was back at the target power zone.

I kept on pushing along until I saw that I had only 2 minutes left. I then told myself:

Okay, only two minutes left. Re-Focus, relax and let's get this done.

With 30 seconds to go, I was pretty much giving it all I had to try to get my average power to match the target since I dug a hole with the first 2-3 minutes being crap. I then said out loud:

30 seconds...anyone can do anything for 30 seconds!

For those that have done P90X, you know that is one of Tony Horton's many corn ball lines but for some reason, I really like saying that one to help get me through the last 30 seconds of any workout. There's something I call the "roofie sensation" which occurs toward the end of a workout or a race where I'm pushing it so hard that everything becomes a blur and time feels like a black hole. I had the roofie sensation for the last 27 seconds until I looked back up and saw I had 3 seconds left. I then looked over at my heart rate and saw that it was 191 bpm. To provide context of how high this is, they say that your max heart rate is 220 minus your age but could be a few beats higher if you are an active person. Theoretically, my max is 189 bpm but I guess I've exercised by body enough to surpass that and not drop dead from cardiac arrest.

Here's the complete picture of what the last interval looked like:


As soon as the time ended on the last interval, I tuned to my left and puked which I guess is your body's way of telling you that you shouldn't be going over your max heart rate. It wasn't an extended puke or anything and when I finished, I smiled to myself and thought:

Man, that's F*cked up but that's the Difference.