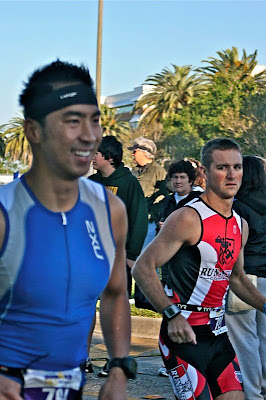 I love how pissed off this guy looks as I'm passing him at NO 70.3

Heading into my first "A" race of the year at Eagleman 70.3, I've had a tremendous experience with the races so far this year in terms of learning about where I'm at with training and learning how to race better. The year so far has been a success early on so I hope the momentum will carry on as I head into the three big "A" races for this year (Eagleman 70.3/Ironman Mont Tremblant/Philly Marathon). Here is a recap so far of the season and at the end, details for Time Prediction Contest #2!

Caesar Rodney Half Marathon (March 25, 2012)
Result: Did Not Start
I had no idea what to think when the Saturday before the race, my left quad developed a cramp. I wasn't sure what it was but during the run that day, I could not comfortably get into a rhythm and my form felt sloppy because I was overcompensating with my right leg due to the cramp on the left. After going back and forth Saturday night, I decided that the best thing to do was not run the race, let the leg heal, and focus on New Orleans 70.3. Being that this was a "C" race for me, there was no benefit in trying to gut the race out and risk further injury. This turned out to be the right decision so far this season.

New Orleans 70.3 Half Ironman (April 22, 2012)* Due to weather conditions, the swim was cancelled and substituted with a 2-mile run, then 52 mile bike, then the regular 13.1 mile half marathon 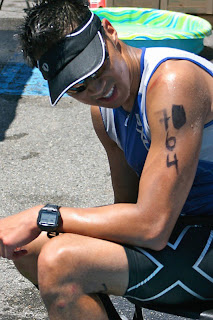 Icing down at the finish

This was the first race of the season and due to the timing, required me to train through the late Fall/early Winter which I've never done before. Due to the swim being cancelled, the course did favor me a bit with a two mile run to start. Though the 2-mile run went well, the race could have easily derailed for me on the bike. Within the first 3 miles of the bike, I lost a full water bottle (nutrition/electrolytes) and a gel flask (nutrition), leaving me with only the 25oz of nutrition/electrolytes in my front TorHans bottle. Both were due to testing out a new set-up of holding the bottle/flask on the bike which I now know won't work in race conditions. Compounding the early issues with premature evacuation (of the bottles), the strong winds caused me to drift on the road around mile 5. I wasn't paying attention and my front tire caught a seam in the middle of the road which sent me flying over my handlebars going 22+ mph. It was probably the adrenaline but I quickly checked to make sure the bike was ok, re-mounted and continued the bike ride. When I hit the run, it started to get pretty hot so I started stuffing the ice sponges they had at the aid stations to help keep me cool. My main error on the run was going out too fast. I was sub 7:30min/mile pace through the first 8 miles whereby my overall target pace was 7:45min/mile. Around 8 miles I started to fade and had to take a few walk breaks after Mile 11. At the finish, I sat in a tub of ice for a little bit to cool down then went to the ER tent to get bandaged up from the bike crash. When my dad saw that I got into a crash, his first question was "Is the bike ok?" I love it.

For being my first race, I'm pretty pleased with the out come. It sucked the swim was cancelled but I think it was good practice on the bike/run. Both the bike/run legs were PR splits for a half ironman race. 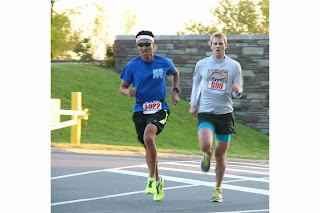 Kicking into the finish


I didn't have any real expectations for this race. I had just finished the New Orleans 70.3 race just five days before this race and didn't know if my body was fully recovered yet. I viewed this as more of a speed/tempo workout and then having a few beers with friends afterwards. The strategy was to go out as hard as I could and hang on for as long as I could. The result was a lot better than I had expected with a time of 24:15 and a  6:04 min/mile pace. My best time at this race was two years ago when I ran 25:42 (6:25min/mile pace). Being able to crush my PR by over a minute was a nice surprise. Even better, our annual running team, Rabies Pro AM finished second overall, which is our highest place ever. The only team better than us was the Manayunk Running Club who took first.

Coming off the surprising Out and Back Run, I was pretty confident I was going to PR in this race which I haven't done in six years. It is not often you go into a big race anticipating to PR so it felt good knowing I was more than ready. The goal was to hit 6:30 min/mile pace for as long as I could then hold on at the end. This was pretty much how the race went and I really had to fight the last two miles In the end, I dropped over 3 minutes over my previous PR of 1:09: 58. The surprising thing is that unlike previous years, I did no track workouts as speed workouts this year, yet was able to run faster. I don't have it quite figured out why as to how that is possible but I think there is definitely carry over from the VO2Max/Threshold workouts from the bike. 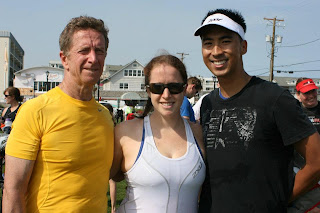 I love doing this race. Great cause and a small modified-Sprint distance Tri to get some speedwork in. My goal this year was to finally get a podium finish after finishing in 5th place for the last two years. I also wanted to break 10-min in the swim and try to have one of the faster bike splits since I've been working hard on my bike through the winter. All three were checked off with a 2nd overall finish in the 30-34 age group and the 2nd fastest bike split in the race (averaging 26.1 mph), second to the guy that one the race who averaged 27.1mph. My buddy Tim Pappas had a fantastic 5K run and actually took first in our age group so that was cool. In terms of lessons learned, I wanted to do a small race without wearing socks for neither the bike nor the run to see if that would help speed up transition times. It did speed up the transition times somewhat but I did pay for it when halfway through the run, I developed a huge blister on my right foot, on the bottom of my feet where I plant off. I had to slow down a little and even had to heel strike a portion of the race because of how bad it hurt. Lesson learned, no more sock-less races! The other unfortunate event was on the 5K run, a volunteer was unfamiliar with the course and turned around pretty much everyone ahead of me only a mile into the run course, which caused them to only run 2 miles of the 3.1 mile course. I knew the course so when he tried to turn me around, I kept on going. Unfortunately, this marred the results a bit as USAT had to step in and decided to disqualify the first 15 people. Hopefully that doesn't happen again but it did bump my finish from 21st to 6th overall so I'll take it.

So that's the season so far. Now it is time to step it up for the "A" races where nothing will be held back. Eagleman 70.3, you're up!

Time Prediction Contest #2
Easy enough, leave a comment on this page or below this link on Facebook with what you think my time will be at Eagleman 70.3. So that everyone has the same data, here's what to expect:


The closest time (can be over or under) wins! Deadline to submit a guess is 5am EST on Sunday, June 10.

The winner will receive a $25 Gift Certificate to my favorite online running shoes/gear store, Runningwarehouse.com. I will email the gift certificate to you. Good luck!
Posted by Unknown at 12:41 PM