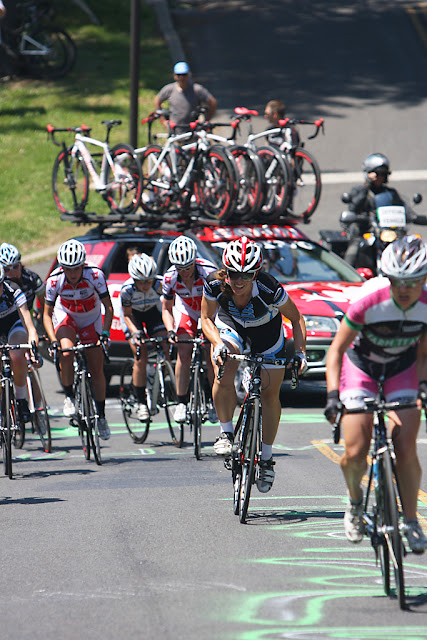 The first Sunday in June aka Manayunk Bike Race Day has always been reserved in my calendar the past several years. My wife and I even decided to schedule our wedding for the second weekend in June to not conflict with Bike Race Weekend (true story). The Bike Race (formally known as the Philadelphia International Cycling Championship) is one of those quirky events specific to Philadelphia where essentially a part of the city turns into one giant house party and the police are very very lenient on drinking alcoholic beverages out in public. I have fully taken advantage of this in prior years, lugging around a cooler up and down The Wall, starting to drink at 8am, and wildly ringing my cow bell as the pro cyclist zip by. When an amateur race was added this year prior to the pro race, I jumped at the opportunity to be on the other side of the gates and ride the same course that the pros ride against other cycling enthusiast.
The race would allow you to do up to three full laps of the course (14.5 miles, total of 43.5 miles) with three hill climbs, including the infamous Wall in Manayunk. I had never done a cycling road race before but could care less, this was going to be an awesome experience.

There were some challenges that potentially could have made this a suck-fest rather than an awesome experience. In particular:
In general, I felt that the training and conditioning from my triathlon training would prepare me well enough to have a respectable showing. I also had a ridiculously fast bike split at the Sea Ise Triathlon (averaged 26.2 mph over 8.3 miles, 2nd fastest time) so I did feel somewhat confident that I could hold my own despite the inexperience of road racing.

Race day quickly came and similar to the night before other races, I slept like sh*t as you can see below. Generally, a good ZQ score (sleep quality) for me is mid-70's and I usually only wake up once at night for a bathroom stop. 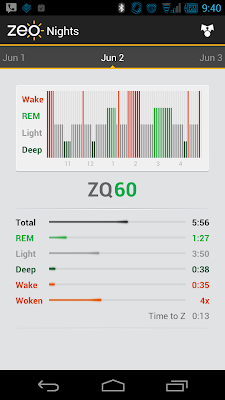 No matter how small or big a race is, I think I get such a mixture of anxiousness/adrenaline of wanting to get out there compete. This is great because the "race mentality" is in full effect but not good for getting a good sleep the night before. Thankfully, I don't think this has negatively impacted a race where I could look back and blame a crappy race on a bad night of sleep the night before a race.

Sunday morning quickly came and I packed up all my things and headed toward the race site. They actually had us park at the Mann Center about 3 miles west of the start. It sounded like a pain in the ass to have to bike 3 miles to the start line but I thought it was a good opportunity to get the legs warmed up prior to the race. Sign in and packet pick-up was quick and straight forward. They gave us a numbered bib and also an RFID tag that taped onto the top of the helmet to track our splits. The only negative at this point was that I had forgotten to bring my sunglasses to ride with which meant I had to deal a little bit with the wind hitting my eyes and some glare from the sun. There would be lots of squinting involved but apparently Asians are good at that.

There were close to 500 riders and they split everyone up into 3 groups: 22+ mph average, 21 to 17 mph average, and under 16mph average. I had no idea what my speed would be so I just put myself into the middle group. As I was waiting for the race to start, one of the cyclist next to me said I had a cheering section trying to get my attention. It was Gina(!) who got up super early after a night out to wish we good luck at the start line. That got me even more amped up to get going. Gina also served un-official camera duty and got some great shots of me at the start. Thanks again Gina!! 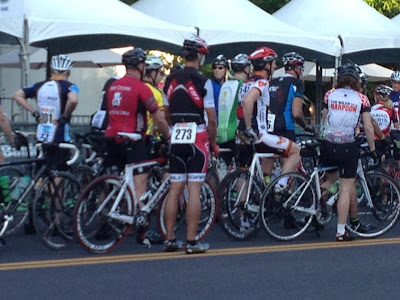 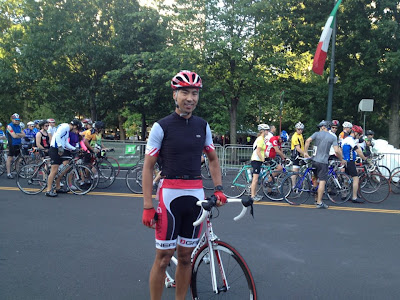 Geared up and ready to go #highfashion 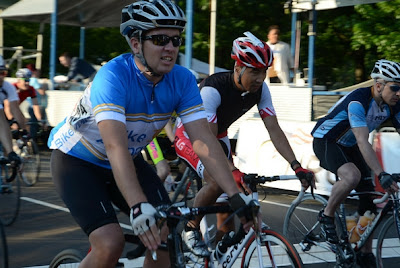 Off we go (and already squinting)

The race itself seemed to be a blur. I started out pretty quickly and was hitting upwards of 25mph on the first stretch down Kelly Dr toward Manayunk. At this point, I knew I had sand bagged putting myself in the 21-17mph group and not being able to go out with the faster packs but whatever, this was my first cycling race. As we made our way down Main St, distinct packs had formed, with a group of riders settling in behind me as a separate pack. I quickly figured out the strategy they had of drafting off me since I was avoiding settling into a pack for fear of causing a crash. As we made the turn off Main St and onto The Wall, it was an un-real feeling. All of these years, I had been on the side of the road cheering cyclist as they attack this 1/2 mile monster of hill. The wall starts out as a gradual climb then halfway through, shoots straight up at a 17% grade, then goes back into a gradual climb until you hit Pechin St. Having practiced The Wall earlier in the week, I knew I was capable of getting up but the trick was to immediately shift gears again and not fall behind the rest of the loop. As you can see below, The Wall from 7am to 9am is a bit more spectator sparse than from 11am to 2pm for the pro race. 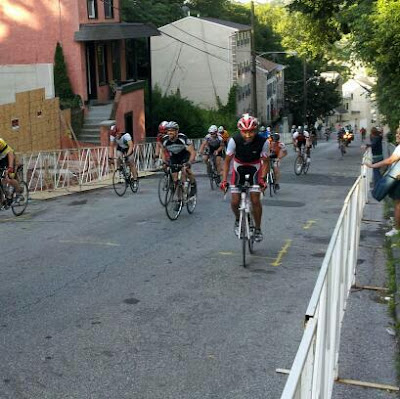 After The Wall, you basically descend back down toward Kelly Dr where you go up two more hills off to the side, including a pretty decent climb up Lemon Hill before completing the loop on a flat breakaway back toward the Art Museum. The Lemon Hill climb was actually a lot harder than I thought because it really creeps up on you toward the end of the loop. 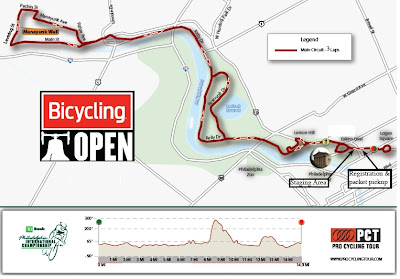 This went on for another two loops. For me, a lot of the race was really observing how a race like this is "raced" in terms of the strategy of when to go into a pack, when to try to "attack", pacing, etc. With my fear of causing a crash while in a tight group, I took it upon myself to try to lead the packs most of the race. At one point, a rider rode up to me during the race and said that I didn't have to "Pull" the group all the time. This is the area where I need to do more reading/riding to understand all of the tactics and strategy that go into a cycling road race. At times, there were things going on/things being said that I had no clue what the hell they were talking about. I'm sure this put me at a disadvantage compared to the more experienced riders so it is an area for me to work on for the race next year. I've already done some research online and ordered a couple of books to prepare for future races.

I stuck with my pack up until the very last climb (Lemon Hill) when it pretty much turned into "every person for them self" and a sprint toward the finish line. I got dropped pretty badly and only beat out 4-5 people in the pack with everyone getting away. I was pretty much solo coming across the finish line with a final time of 1:57:22 (22.3 mph average) good for 57th overall and 20th out of 79 people in the 30-39 Male age group. 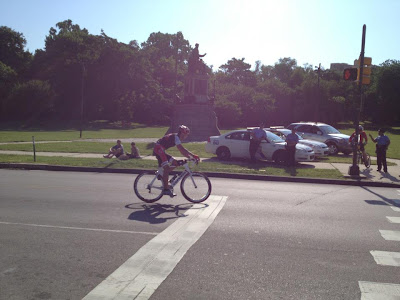 Heading into the finish! 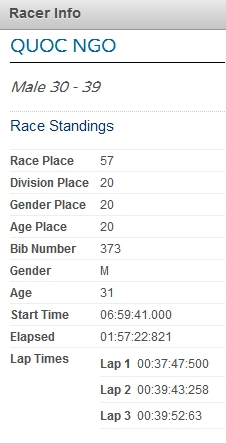 Overall, this race was an absolute blast. It was incredible for me to be on the other side of this race and riding the same course that the pros ride. There was plenty of volunteer support on the course and they had several people on motorcycles guiding the riders, just like in the pro race. Although the crowds were sparse due to the 7am start time, the people that were there were still just as loud, especially my family/friends who came out early to cheer me on. I think there will be more participants/spectators next year when there is more awareness of the race. I already decided that if they do bring this race back next year, I absolutely will do this race again with a goal of finishing in the Top 25 no matter how many cyclist sign up next year. For my first cycling road race, I really enjoyed it and will look to do more races next year. The combination of speed and strategy makes it really appealing to me. Thanks again to all my incredible family and friends that cheered me for this race! On to the next one...